A journey
into the heart
of the great north

Located on the George River, Helen Falls is a three-mile long stretch of rapids and chutes considered as one of the world’s top three salmon fishing sites.

Our lodge is situated on a rise of land overlooking the George River about one mile downstream from the falls. Here you will find comfortable lodging & facilities – your home for the week. 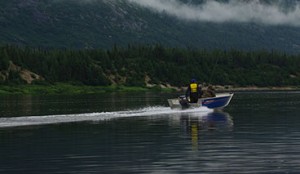 While we are located 900 miles or 1450 kilometers North of Montreal travelling to our lodge is simple, quick and civilized. We will fly you in from Montreal and have you fishing after a maximum of 3 hours of flight time. 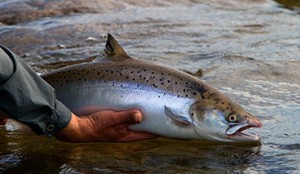 The George River is counted among the ten best Atlantic Salmon rivers in the world. The cold temperatures of the Ungava Bay combined with a long, turbulent and boulder infested water course produces a salmon that is considered by many to be one of strongest among the Atlantic salmon populations of the World. The average George River salmon weighs between 10 and 14 pounds, though fish up to 38 pounds have been caught. 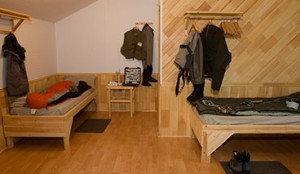 This may be the subarctic, but we don’t think it should be an exercise in endurance. We want you to be well rested for the fishing. Each private cabin accommodates two anglers with plenty of space for your gear. The cabins come equipped with thermostat controlled heated stoves, indoor plumbing and showers with plenty of hot water.

“In the world of Atlantic Salmon, the George River is a coveted destination and Helen Falls is the most glorious stretch of Wilderness River you could ever hope to wade.”

First discovered by Inuit populations, Helen Falls’ potential was first fully acknowledged and exploited in the 50s’. Since its early years, the camp has seen many changes. Now managed by the Annanack and Cantafio families, the lodge boosts permanent facilities including new guest cabins, dinning and kitchen area and a private airstrip. The lodge under permit # 10-501 represents the first outfitting permit ever issued in Northern Quebec. It continues to represent one of the very best fishing lodges in Nunavik, has won numerous awards of excellence and continues to draw salmon anglers Worldwide looking for the challenge that only the salmon of the George River can provide. Located only 35 miles from the Ungava Bay, the fish are fresh and sea-bright; so much so that many still carry sea-lice indicating that they’ve been in fresh water for less than 24 hours.

We are open, come visit us !